Mind Your Manners! 20 Etiquette Tips When You Travel to Japan 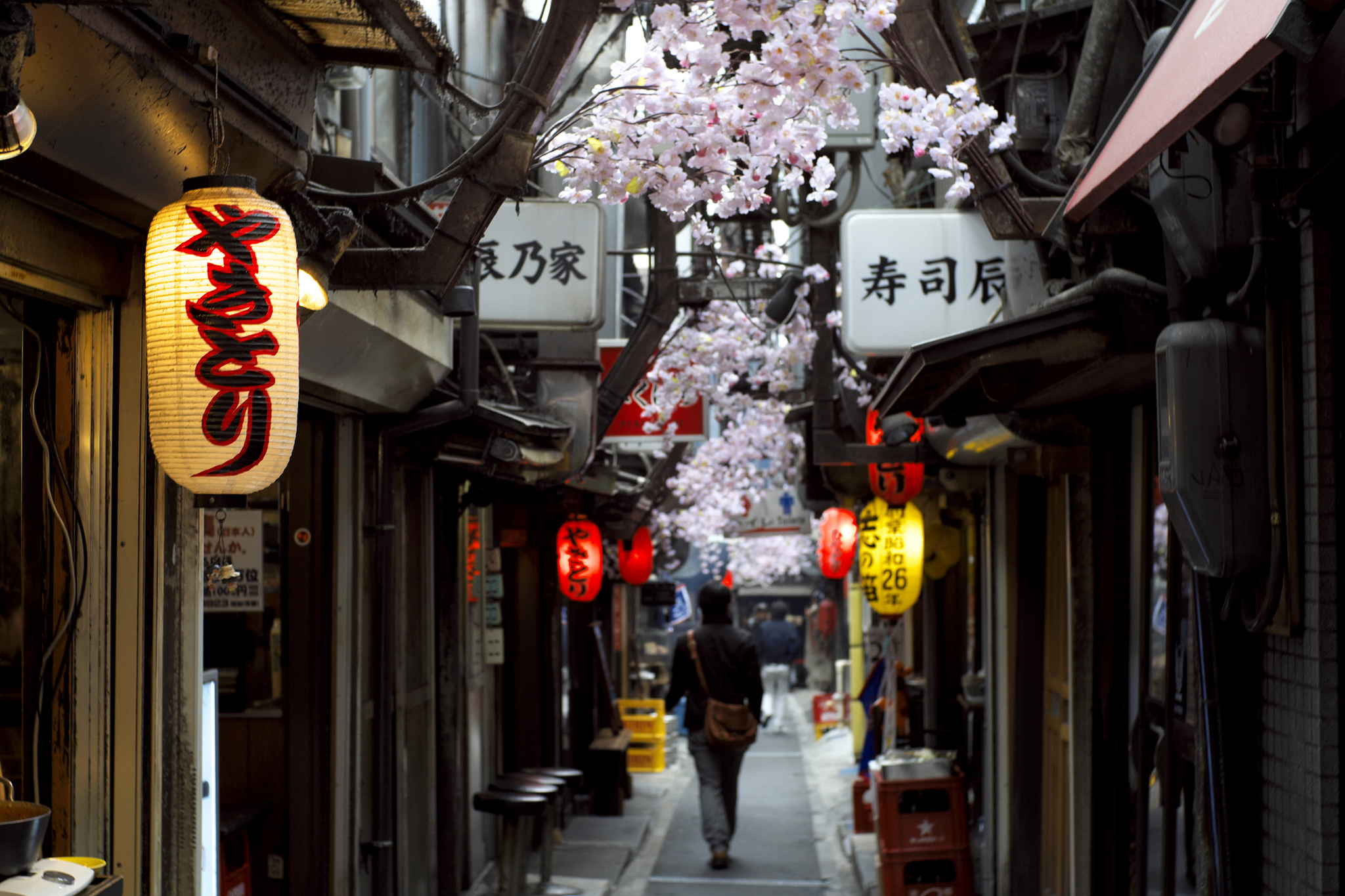 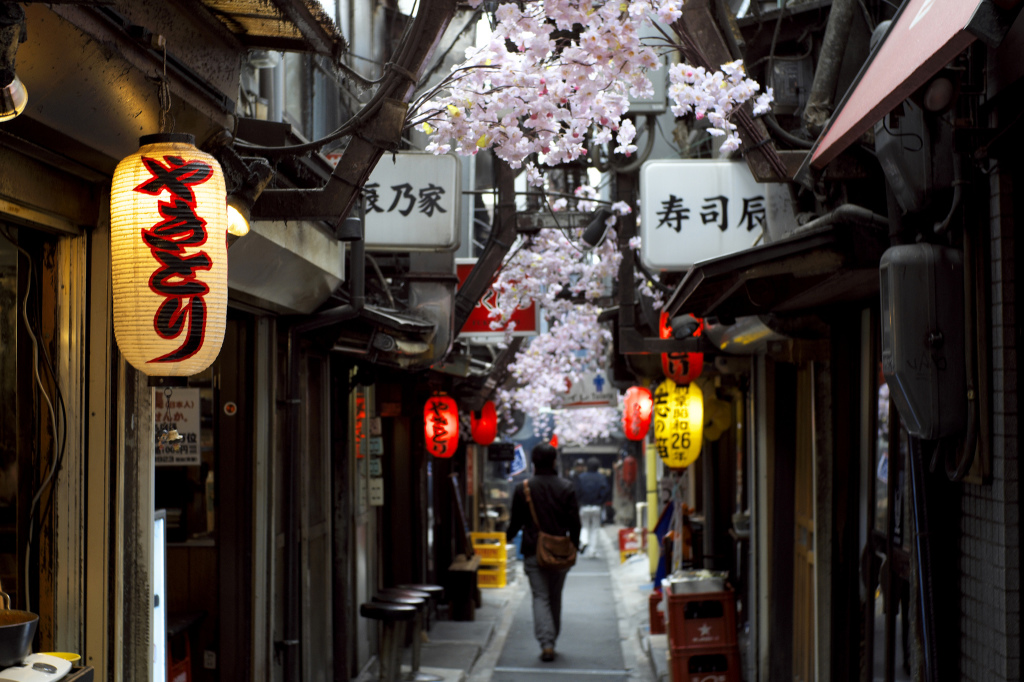 If you want to immerse yourself in the culture of the country that you will be visiting, it is best to learn the commons customs and etiquette of that country. Following them would not hurt. And the locals will appreciate you greatly for it.

When traveling to Japan, there are several things that you can do to follow the customary etiquette. You can use these twenty etiquette tips when you travel to Japan. You don’t really need to be too gung-ho about it. But doing even just a few of them would be great. 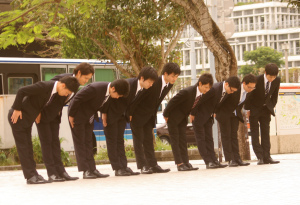 It is common practive to bow when greeting in Japan. Image Source: Flickr

It is customary for people to greet each other by bowing. There is meaning in a deep bow or a small nod of the head. The Japanese bow as a sign of respect. You bow to someone who is of a higher social status that you or someone who is older. Deep, long bows that are 90 degree ones show a deep respect. If you give a small nod of the head, it is a casual and informal bow. You can normally do this with close friends. As a foreigner, you are not expected to practice bowing. If possible, a slight bow would be enough when greeting other people. You also bow to express gratitude, apology and when you make a request to someone. Bowing in Japan is like shaking hands in America. You can also shake hands in Japan as an exception but I do recommend bowing if possible.

If you are visiting a Japanese friend or were invited over to their house, you would need to remove your shoes. This is done unless the owner of the house permits you to wear you shoes inside. Indoor slippers for guests are sometimes provided when available. When you are eating out in a restaurant where the style is that of low traditional tables where you sit on pillows, you will either need to remove your shoes at the entrance or before entering the seating area.

3. Calling out the attention of a waiter or hotel employee

If you want to call out to a waiter or a hotel employee to place an order or to ask a question, you can start by saying “Sumimasen” (Excuse me). It is always good to be polite.

4. Before and after your meal

Before eating, it is customary in Japan to say “Itadakimasu” (I gratefully receive.) and “Gochisisama deshita” (Thank you for the meal.). After eating, try to put back the plates where they were originally placed. An example would be putting the chopsticks (if you used them) back in its holder or paper slip.

5. Paying after eating your meal 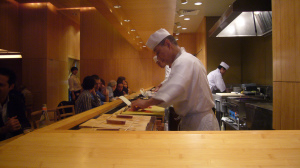 When you receive the bill, it will be given to you upside down. In most Japanese restaurants, paying would mean that you need to walk up to the cashier (usually near the entrance) before going out. It is not customary to pay at the table. It is advisable to pay in cash. However, a growing number of restaurants have been accepting credit cards now. I do suggest using cash.

It is not customary to leave a tip when you eat at a restaurant in Japan. If you leave money on the table, you will most likely be chased down by a restaurant employee to return it. Show them your appreciation by saying “Gochisosama deshita!” before you leave.

7. Don’t blow your nose in public

Blowing your nose in public is considered bad manners in Japan most especially at the table.

It is polite to make sure that you eat everything on your plate down to the last grain of rice.

It is considered bad manners to burp in public.

When out drinking, especially with Japanese friends, you can drink only after all the drinks have been served and the customary toast “Kanpai!” is said. 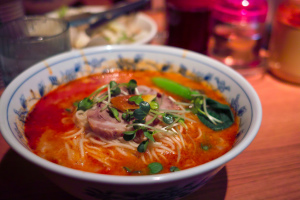 Slurp the noodles up to show your appreciation. Image Source: Flickr

11. You can slurp the noodles

When eating noodles like ramen, you can use the chopsticks to lead the noodles directly into your mouth. You can make slurping sounds while eating noodles to show your appreciation of the food. Although this may be considered bad manners in Western countries, you can slurp food all you want in Japan.

It is customary to eat sushi whole as to not destroy the beautifully prepared sushi.

It is considered bad manners if you waste soya sauce in Japan. Only pour out the right amount that you will be using for dipping on a separate plate.

14. Drink soup directly from the bowl

Unless a ceramic spoon is provided to scoop up the soup, you can just drink it directly from the bowl while you chopsticks pick out the other ingredients.

If you are using chopsticks, make sure not to stick them into food especially rice. This is only done during funerals with rice put into the altar. You also do not pass food from one pair of chopsticks to another. If you are passing food, put it on your companion’s plate. Do not point with your chopsticks. 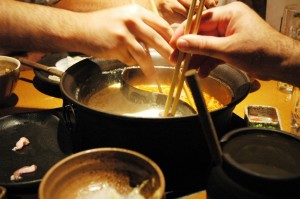 Spoons and forks are provided in restaurants that serve western food. It is common that chopsticks will the main utensil to use for eating. Ceramic spoons may be provided for soups.

17. At temples and shrines

Behave respectfully. Be calm. You would need to leave your shoes when entering certain temples and shrines. There will be shoe boxes provided at the entrance to store your shoes. Of you can bring a plastic bag with you so that you can carry your shoes. Wear nice socks since you will be walking around the temple or shrine in them. Watch for signs. There are some temples or shrines that prohibit photography especially in the inner parts.

It is customary in Japan for people to call each other by their last name with “-san” (Mr./Mrs./Ms.) attached afterwards. It is the most commonly used suffix. You can attach this suffix when calling a Japanese friend’s name. Only family members, close friends or children normally address each other with their first names. Foreigner names are written in Katakana. There are also other suffixes used when calling names like “-sensei” for a teacher, doctor or politician. “-Sama” is a very formal suffix. It is the polite form of “-san” and is normally used in letters. 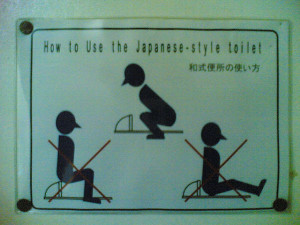 How to use the Japanese toilet. Image Source: Flickr

Western-style toilets are already used in most establishments but if you encounter a Japanese-style toilet, you need to squat facing the front of the toilet (where the drain is). It is useful to bring you own tissues just in case they are not provided especially in public toilets.

You can say “ohayo gozaimasu” for good morning, “konnichiwa” for good afternoon, “konbanwa” for good evening and “arigatou (gozaimasu)” for thank you. Saying “hajimemashite” to someone you just met for the first time is also a standard greeting in Japan.

These are just some of the things that you need to do for you to observe proper etiquette in Japan. It is never wrong to try and follow the Japanese way while you are there. The people around you will be much appreciative with the effort you are willing to exert just to be polite.