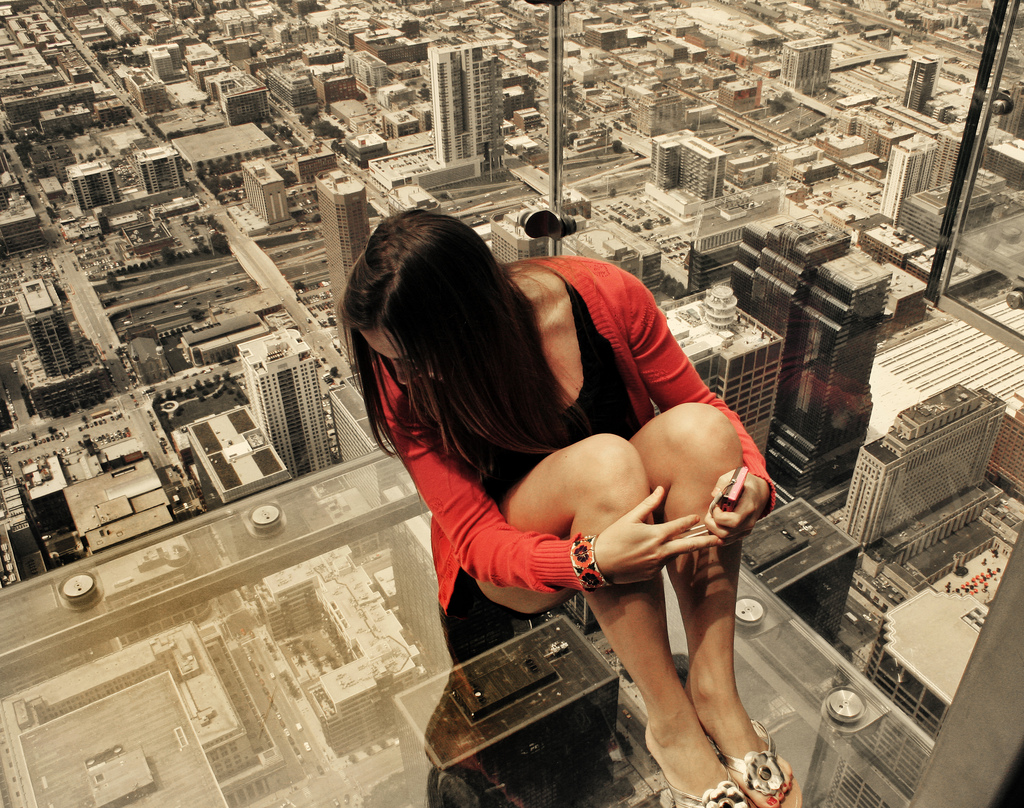 These are the most incredible places in the world that you would want to stand there and look down. Click on the image for bigger version and enjoy! Let’s start the count down!

Atop the 12,600 foot Aiguille du Midi peak is a glass cage named “Step into the Void.” Visitors enjoy the view of Mont Blanc, Europe’s highest mountain, from what is the world’s highest glass floor. 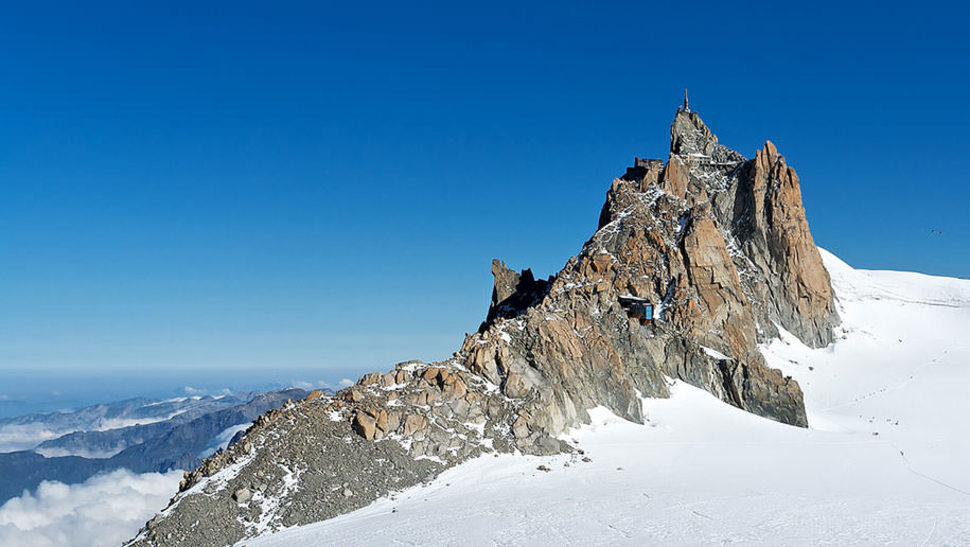 #23: Burj Khalifa in Dubai – The tallest building in the world

Burj Khalifa is 2,700 feet tall. For perspective, that’s around twice as tall as the Empire State Building. If you’re brave enough, you can overlook Dubai from what is likely the most awe-inspiring observation deck in the world.

The Grand Canyon Skywalk is owned and operated by the Hualapai Indian tribe. Beneath the viewing platform is a straight 700 foot drop.

#21: Skydecks at the top of the Willis (Sears) Tower, Chicago

“The Ledge” is a glass balcony suspended 1300 feet in the air. Although the glass panes can take a weight of 10,000 pounds, visitors still have a hard time keeping their stomach settled as they look down on helicopters and roof tops.

The CN Tower is a 1,800 foot high communications and observation tower. Whether you’re on the observation deck or outside of it, the tower offers amazing views of the city.

This sky bridge in Malaysia is 410 feet long and 2,300 feet above sea level. It crosses over the picturesque peak of Gunung Mat Chinchang, a mountain on the island of Pulau Langkawi.

Blackpool Tower was opened to the public in 1894. It stands at a height of 518 feet, with an observation deck at the very top. The tower overlooks the piers and amusements of this Victorian town.

The Walk of Faith is a glass walkway built on the side of the 4700 foot tall Zhangjiajie Tianmen. You arrive by cable car, and as long as you don’t suffer from vertigo, the leisurely stroll is an unforgettable experience.

Sky Tower is over 1,000 feet tall and dominates the Auckland skyline. If you’re brave enough to leave the observation deck, you can go for a walk on the top of the tower and if you’re a maniac, you can even bungee jump off it.

Around 325 feet up the Alpspix mountain is this short bridge that offers amazing views of the valley. Beneath the bridge floor is a sheer drop.

Spinnaker Tower is the tallest tower in the UK outside of London, standing at 560 foot tall. The crows nest is the highest of three observation platforms, and with only a wire mesh roof, it’s entirely open to the elements.

Trolltunga hovers 2,300 feet above lake Ringedalsvatnet. It’s a challenging hike, but the natural platforms offer astounding views of the mountainside.

#12: The bridge between the Petronas Towers, Kuala Lumpur, Malaysia

These towers stand at nearly 1,500 foot tall. The bridge between them is only about ⅓ of the way up, but 550 feet is sufficient height to be mortified.

The Dachstein Glacier resort in the Alps is home to one of the highest bridges in the world. With a 1,300 drop to the bottom of the mountains, if you get dizzy just looking at the pictures then this stairway to nothingness isn’t for you.

At 1500 feet tall, this TV tower was the largest structure in China for more than a decade. It still dominates the Shanghai skyline.

Lion’s Head overlooks Cape Town and completely eclipses man made structures at 2,200 feet tall. From the summit of the mountain, you can see a majority of the sprawling city.

The Skytree is the tallest tower in the world and the second tallest structure, with a full height of 2080 feet. I think I’m ready to come down now.

#7: The Heavenly Stairs in China

This terrifying path up Mt. Hua Shan, which is more than 7,000 feet high, leads to a teahouse which supposedly has some of the best tea in the world.

Atop 57 stories of this triple-skyscraper hotel is an infinity pool, which boasts the most spectacular view of the Singapore skyline.

Cliffwalk (Capilano Suspension Bridge) follows the Capilano River for 700 feet and at its highest point, reaches 300 feet above the river.

Opened in 1932, the bridge overlooks Port Jackson. Those daring enough can ascend the 440 foot high bridge and walk atop it.

At its peak, this ancient granite dome rises more than 4,700 feet above the valley floor. Various cliffs offer a vantage point to take in the beautiful national park.

Insanity is a ride that spins you at speeds of up to three G’s. It also hangs 64 feet from the side of the Stratosphere Hotel and 900 feet above the ground. Yikes.

This bridge crosses the 1000 foot deep Royal Gorge, making it the highest bridge in the United States. Few are brave enough to go across the gorge in a bridge, let alone a cable car.

If you have been in one of these amazing places, leave a comment below about your experience. Where would you like to go next?

This site is a participant in the Amazon Services LLC Associates Program, an affiliate advertising program designed to provide a means for sites to earn advertising fees by linking to Amazon.com.